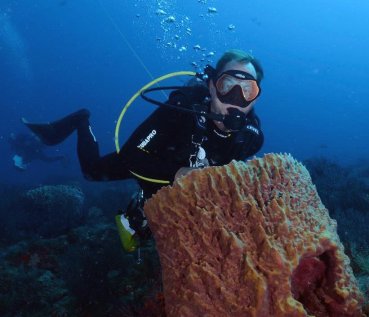 Luke Smith was born in  Boonsboro, MD which was founded by the cousins of the famous Daniel Boone. He attended Boonsboro High School then went on to the University of Maryland where he graduated with honors from their firefighter paramedic training program. Luke worked as a firefighter paramedic for 10 years before becoming a corporate executive chef.

Luke soon realized Boonsboro wasn't providing him everything he needed so he moved to Florida in 2018. He received his open water certification two years after arriving in Florida and worked his way up to Divemaster in less than a year! He knew from his first open water class that this is what his calling is. He loves seeing people experience the underwater world for the first time and is working towards getting his instructor certification.

Luke's favorite thing to see while diving is sharks, he says "they're the coolest thing ever!"