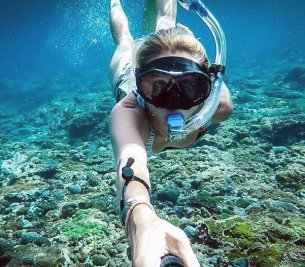 Christy Toledo is a native Floridian, born here in Wellington.  She earned her Open Water certification during her first year at the University of North Florida. Her love of the ocean led her to get Advanced and Rescue certifications almost immediately after her Open Water class.

Christy started working at the SC in 2019 and has proven she has what it takes to be a competent leader on the Loggerhead III and in our cool retail store. Her hobbies include surfing, diving, traveling and working out. Christy is a well known fitness instructor specializing in yoga, spinning, total body sculpt and also does personal training.

Christy was fortunate enough to live in Argentina for two years and became fluent in Spanish. She has traveled to over 30 countries which is a feat in itself. She is also the proud Mom of a toy miniature pinscher named Limon. Christy is a ray of sunshine and we are so happy to have her on our team!